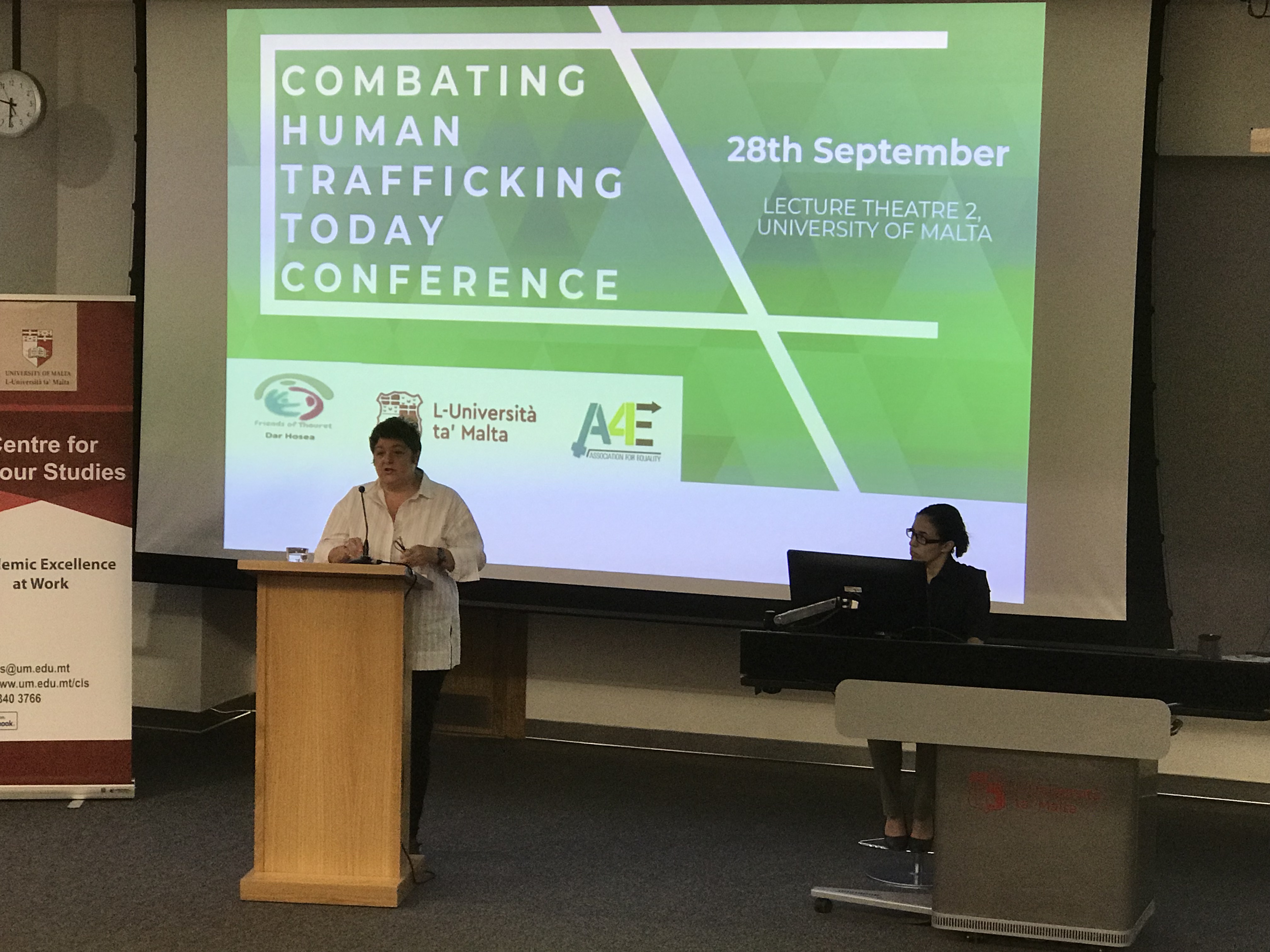 The message from all the experts speaking in a conference with the theme “Combating Human Trafficking Today – Taking stock of evidence-based research and sharing experiences from Europe” organised by the Association for Equality, the Centre for Labour Studies at the University of Malta and Dar Hosea, was for the Government to adopt the Nordic Model in reforming our laws dealing with prostitution.

The message to policy makers was loud and clear, criminalise the pimps and those who seek the services of prostitutes (the Johns) but not the prostitutes who are vulnerable and victims, that need protection and not imprisonment.
The Parliamentary Secretary Hon Julia Farrugia Portelli in introducing the Conference stated that sharing the concerns and the need to protect the vulnerable, was yet not committed to a model and stated that Malta should have its own model.

Many of the speakers emphasised that legalising or regularising prostitution has one outcome increasing the demand for human trafficking as you increase the demand for sexual services. With the intention of reducing crime what has happened in countries like the Netherland and New Zealand, more vulnerable people are forced and trafficked into the so called industry and other related crimes like drug abuse, rape, theft etc. increase.

The solution found by Nordic countries like Sweden was to put the criminal burden and responsibility on the person seeking sex. When you criminalise who is creating demand, that demand will fall and will and thus reduce human trafficking.

It also is a lie that women enter the industry freely, while exceptions always exist, these exceptions should not be used as human shields to justify decriminalisation that effected negatively the remaining vast majority trafficked. Stories and research presented during the Conference by various speakers showed that vulnerable women trafficked into prostitution, are generally women that have been victims themselves of child abuse, were sever poverty and deprivation and other social difficulties. Many times they find themselves forced, coerced and trapped in becoming prostitutes.
Ms Julie Bindel a journalist, broadcaster and writer, author of the book The Pimping of Prostitution: Abolishing the Sex Work Myth spoke at length on her research in the field and she concludes that “trafficking would not exist if our countries would not have a vibrant sex industry”. Bindle’s appealed to Malta to tackle the men running the industry and adopt the Nordic model and make Malta a no go area for traffickers.

Ms. Helen Burrows UK a moderator in one of the discussions asked how Malta a Catholic country was still lagging behind and in the protection of women trapped in prostitution and had not yet adopted the Nordic Model.

The answer to the question was strangely and unintentionally given by Ms. Kaysa Wahlberg Head of the Swedish Police Authority’s Human Trafficking Unit who stated that Sweden is a moralistic society i.e. the morals of the nation influences legislators. It seems unfortunately this is no longer the case in Malta, where Catholics in Malta have since the divorce referendum campaign been brainwashed to believe that as long as it is ok for others it’s is ok for you, and that today being part of secular society our moral values should not come in the way of whatever is presented as civil rights.

As described in the introduction, liberal Sweden teaches us otherwise, that morals and values should be the guiding principles of any legislation.

See the detailed report of the proceedings in our Blog