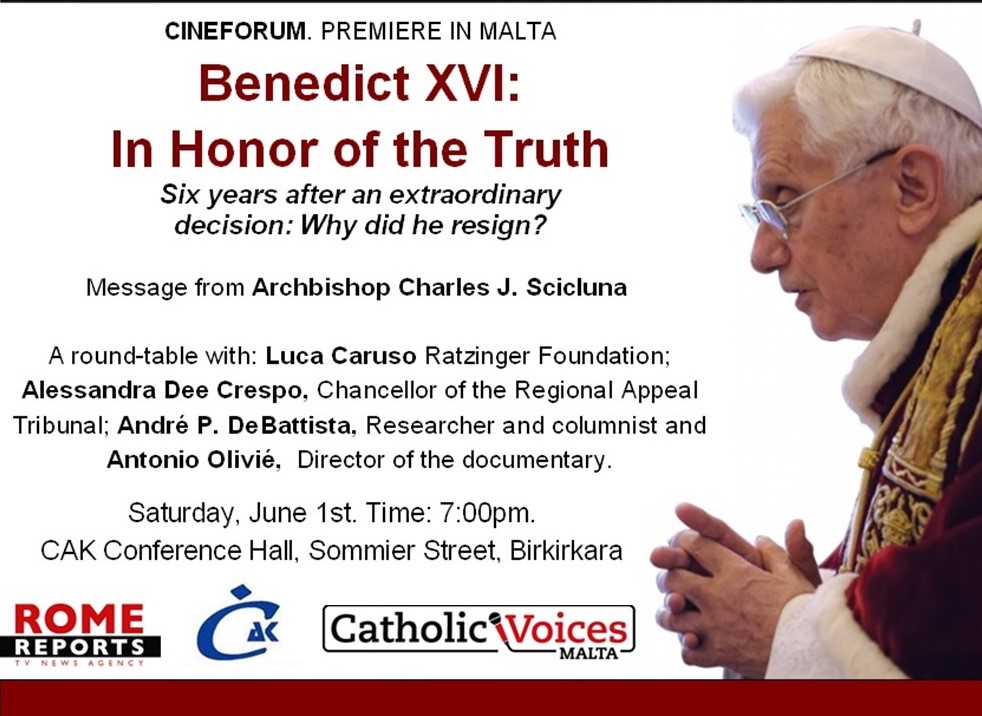 Saturday, 1st June 2019, Rome Reports in collaboration with Catholic Voices Malta and CAK will be airing the documentary ‘Benedict XVI, in Honor of the Truth’.

The 48-minute documentary seeks to answer the question in many people’s mind as to why Pope Benedict XVI resignation five years ago, the first Pope to present his resignation in 700 years. Was it the coming to the fore of the sexual abuse cases by priests or the butler stealing the Pope’s confidential documents?

Rome Reports seeks to answer this question through the study of documents held by the Vatican archives and a series of interviews with people close to Ratzinger and witnessed closely the most significant moments in the life of the pontiff’. These include Ratzinger’s brother, Georg Ratzinger; the former spokesman of the Holy See, Fr. Federico Lombardi, and other close collaborators, such as Cardinal Cristoph Schönborn and his assistant Stephen Horn.

The documentary will be part of a Cineform that will be followed by a round table discussion with Antonio Olivié the director of the documentary; Alessandra Dee Crespo the chancellor of the Regional Appeal Tribunal, Luca Caruso, biographer and the director of Communications of the Ratzinger Foundation and André P. De Battista, a political researcher and columnist. An interview with Archbishop Charles J. Scicluna who worked closely with both Pope Benedict will also be aired during the forum.

The documentary was produced by Rome Reports an independent television agency, in collaboration with TV2000, the Joseph Ratzinger Vatican Foundation, and sponsored by the Ramón Tallaj Ureña Foundation. It has versions in Italian, Spanish and English and has been distributed in more than 10 countries.

The Cineform will be held at the CAK Conference Hall, Sommier Street, Birkirkara on the 1 June 2019 at 7.00 pm.